The Art of Johnny Montgomery on display at Seminole Nation Museum 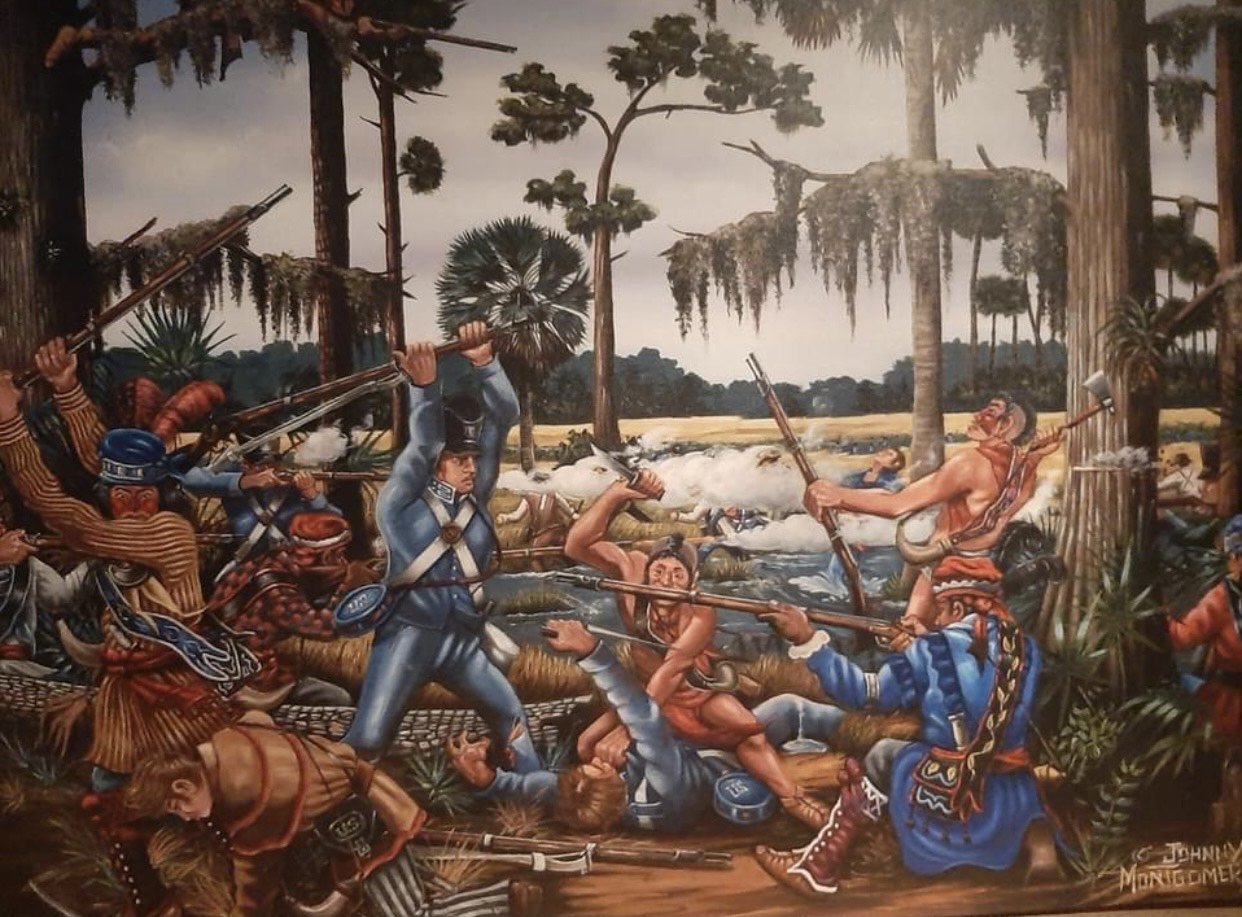 I was able to speak to Mr. Montgomery while he was at home in Charleston, South Carolina. And very quickly in our conversation, we covered the important facts. He is a Vietnam veteran. He was a paratrooper, 82nd Airborne Division. Being in the military allowed him to see the world. But he is very proud of the people he descended from and the place where he grew up. He is Gullah. He grew up eating eel and crab and grits. He said eating alligator and racoon was not out of the norm. He, also, grew up eating the South Carolinian staple – red rice, which can be eaten for breakfast, lunch, or dinner.

He began drawing at a very young age. When he would visit his maternal grandmother during the summer, he would spend his free time tracing farm animals. As a young adult, he took two years of art classes in college. These courses taught him the fundamentals of art, such as perspective and foreshortening. With this foundation in painting, Mr. Montgomery was equipped to begin his career as a fine artist, but he needed a subject.

When he learned about the Seminoles and Black Seminoles, he immediately began doing research on his own, consuming as many books as he could. He even attended a few Seminole Days celebrations in Brackettville, Texas, and visited with Miss Charles Emily Wilson and Mr. William “Dub” Warrior, who were the matriarch and patriarch, respectively, of our group.

During our conversation, Mr. Montgomery spoke about how his heritage has informed his art by giving it a deep purpose. He calls his work “Cultural Art.” He has been painting the Gullahs, Seminoles, and Black Seminoles for more than half a century. His work is the culmination of decades of research. He is a historian in his own right. Mr. Montgomery uses his knowledge to paint history onto his canvases. He has single-handedly given us a vision of what our Seminole and Black Seminole forebearers may have liked like, from the perspective of a Black man. They are not depicted as “savages” or “slaves.” Instead, they are depicted as real people, who were strong, fierce, brave, and resilient. And this is why his work is so important and should be celebrated.

This exhibition came together with the help of Ms. Theressa Golden, who is a force in her own right. I had the chance to speak with her, and she said that, after Mr. Montgomery attended the Wewoka Sorghum Festival in October, the idea for his exhibition came about, and just a few months later, plans for his work to be displayed were in place.

In preparation for this exhibition, Mr. Montgomery said that he personally drove his painting out to Oklahoma. He said he has plans to attend our annual Seminole Days celebration in Brackettville this year, as well, and we are certainly looking forward to finally meeting him in person. Our museum was the lucky recipient of one of his paintings (“Battle of Lake Okeechobee”) a few years back, and we can’t wait to thank Mr. Montgomery for sharing his immense talent with us in person.