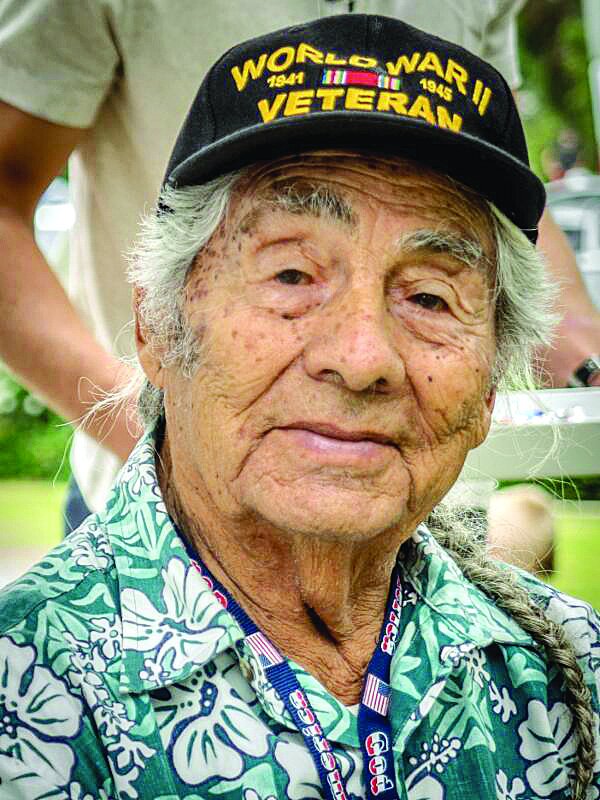 80 year San Diego Resident and Cherokee Indian, Joe Renteria, aged 104, passed away peacefully on Sunday October 24, 2021. Orphaned at a young age, Joe had many adventures. From riding trains as a Hobo to walking on stilts in Ringling Bros Barnum & Bailey’s Circus to meeting Father Flanagan himself at BoysTown Boys Home in Omaha, Nebraska.

An Army and Navy Veteran of WWII and Korea, Joe served as Admiral Bull Halsey’s Staff Photographer in the South Pacific Theater. After retiring, he was employed by San Diego State University as Head of Photography for 34 years.

Joe also served on the Native American Indian Health Center Board, Native American Child Services Board and the Native American Human Resource Board. The Indian Community was very dear to Joe’s heart and he attended every PowWow that he could, visiting with all his friends and making new ones. For many years, he made sure to get to the SDAIHC Balboa Park PowWow early to help set up chairs and then to teach the kids to walk on stilts that he had handmade.

He loved to go to the Elders Meetings and Craft Class on Friday nights, then to attend the Wellness Group that Sparrow Goudey held on Saturday mornings. I think he was the best eater they had during their potlucks. And he simply enjoyed popping in to the Health Clinic and making everyone smile.

Joe and his son, Michael, built their Point Loma adobe home themselves, taking adult classes for plumbing, electrical and brick laying. His beloved wife, Jill, had designed the home and Joe and her took time to travel all the way to San Francisco visiting every mission along the way, taking pictures of them and making notes on the construction of them as research for their own adobe home.

Joe used his talent as a photographer to fund the build, photographing a wedding a week for a year. Joe always had an upbeat attitude and was always willing to give a helping hand. His lifelong motto was “Go For It”. He always told everyone to “Keep Moving” and that the secret to a long life is POSITIVE THINKING! Joe will be missed terribly by all who knew him. But he is at peace now and forever with his darling wife, Jill, of 71 years.

Celebrating The Grand Opening of the IIpay-Tipai Kumeyaay Mut Niihepok :Land of the First People

On October 26, 2021 San Diego was graced with the Opening  of the Iipay- Tipai  Kumeyaay Muy Niihepok State Park located at 2829 Juan St. near the  Old Town Transit Center.  The crowd was graced with the presence of Armando Quintero the Director of California State Parks and Recreation, who opened the ceremony for the Tribal Elders including Mr. Kenny Meza of Jamul Indian Village: A Kumeyaay Nation and Dr Stan Rodriguez Iipay Nation of Santa Ysabel  .  The Community was serenaded with Bird Songs by Dr Harry Paul Cuero of the Campo Band Kumeyaay and Chairman John Christman of the Viejas Band of Kumeyaay Indians

Many organizations like The Kumeyaay Wellness Center were present to support Community and extend an invitation for  supportive Health Services for the Community including Medical , Dental and Behavioral Health Services. Other participants included the Rincon Youth Storytellers who provided the Community with holistic natural Skincare products and Sage  that are available for purchase at 760-215-4378.

The Park Opening also included  a Powerful Prayer Circle lead by the Elders that included Healing Music and Handshaking to bless the Nation.  The Iipay – Tipai Kumeyaay Park is now open to the public.

Due in great part to the guided sway of Erica Pinto, chairwoman of Jamul Indian Village and a member of San Diego Unified school naming committee, incremental societal advances are being made.

The San Diego Unified School Board voted unanimously Tuesday 11-8-21  to approve the name for the new school, which will open within the Civita development in Mission Valley next year will be called Nipaquay Elementary to honor Indigenous history.

The Kumeyaay village existed in the area long before Spanish colonization.

San Diego Unified officials,  are making great efforts  to embrace ethnic studies and other racial diversity efforts in recent years The naming process is a chance for reconciliation and for acknowledging historical injustices against people of color, including a history of violence against Indigenous people.

“Things are just changing, and we are on the right path for student leadership and equity and justice and that recognition of genocide,” said Erica Pinto.

A hedge fund called Alden Global Capital is buying up and gutting newspapers all over the country, including some of the nation’s most storied publications.

Their strategy is simple: Strip the newspaper to bare bones. Cash in on existing subscribers and advertisers. Watch profits go up — and journalism die.