Randy Edmonds is the Grand Master of Ceremonies 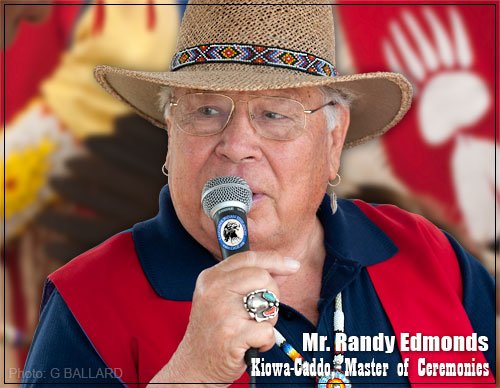 If you have been to a pow wow in Southern California, then you have heard Randy Edmonds. His deep soothing voice blended with traditional whimsy and humor creates a feel good and educational Pow Wow Experience. Accompanying his wonderful announcer voice is his commitment to Native American people, as is evident by his decades of advocacy work. It is no wonder that he is asked time and time again to emcee countless pow wows around Southern California and the entire United States of America.

Edmonds is of the Kiowa and Caddo Nations. He explained to me how the Kiowa made their way from Montana toward Oklahoma, during which time they made alliances with the Comanche and then the Apache, who arrived in Oklahoma under Geronimo’s leadership. Oklahoma was a forced destination for many Native Americans, mostly because of the Indian Removal Act of 1830. Oklahoma became a destination for 39 tribes from around the East Coast and Mid-West. Edmonds further explained that the federal government sought to better monitor the Native Americans be forcing them into that one area.

Edmonds was born in 1934 and moved from Oklahoma to Los Angeles in the 50’s as part of the Indian Relocation Act of 1956. Upon arriving in Los Angeles, he met many other Native Americans from different parts of the country. He eventually became the Director of the Los Angeles Relocation Program. He explains how during this time there were no pow wows the way we know them today. Not wanting to lose their culture by assimilation, some began forming drumming groups to help retain their songs, prayers, dances, and spirituality from their respective nations. He began being asked to emcee for these initial drumming groups that persisted though the 60’s and 70’s, at which time the pow wows started to form. He said in the beginning of these drumming groups many Sioux were present and offered dances, until they began to form their own drumming groups representing a Northern style. Although there would be many different Native Americans present at these early drumming groups an agglomeration of styles melded into predominately two styles; Northern and Southern. Edmonds elaborated that this was a type of Pan-Indian way, an effort to retain all native cultures and create unity within the whole.

After Los Angeles, Edmonds moved to San Diego, where he founded the Indian Human Resource Center. He served on the Human Relations Commission of San Diego and Los Angeles, was an administrator for the Los Angles Indian Center, the Equal Opportunity Program, and founder of the National Indian Urban Council. Edmonds has served as an advisor on Native American issues to local, state, and national governments for decades. He officially retired in 1999, but he hasn’t let that stop him from emceeing or winning an Emmy. Yes, in 2019 he won an Emmy for his role as narrator for an animated film called Crow The Legend. It is a heartwarming film based on the Native American story of the revered Crow. The film features more than a few heavy hitting celebrities like John Legend and Oprah Winfrey, and you can watch it for free on Youtube! Of all the pow wows Edmonds has been a part of, he felt most honored to be selected the Head Gourd Dancer and Head Staff at the Gathering of the Nations Pow Wow in Albuquerque New Mexico.

The Imperial Beach Pow Wow by the Sea, on December 18 and 19, will be Edmond’s next MC event. He adds that the Pow Wows are a way for Native people to celebrate our culture, bring together many spiritualities, create a space for healing, and an opportunity to educate non-native peoples. For youth that wish to follow in his footsteps he advises that they get involved with their community, listen to their elders, and establish status for Native Americans because still many people are not aware of Native issues even though there are 18 reservations surrounding San Diego County alone.

The traditions, world view and customs of the Kumeyaay will embrace and honor all nations at the Pow Wow by the Sea. Randy Edmonds will be there with Santa to communicate and amplify the message.

Please join us as we celebrate the 104th birthday and legacy of Fannie Lou Hamer, a human rights leader and forerunner in the food justice movement. This festive event will highlight food activism and artistry, and serves as the primary fundraising campaign to aid Project New Village in their fight for food justice in Greater Southeastern San Diego.

Co-hosted by San Diego City Councilmembers Monica Montgomery Steppe (4th District) and Sean Elo-Rivera (9th District), this gala event promises to be filled with fun and purpose! The night will feature Mozambique inspired comfort food , beverages , live acoustic music, artistic performances focusing on social justice, and our awards presentation honoring those community members who have shown an inspiring dedication to food justice and activism throughout the past year. This year’s event is extra special as we are honored to have Greg Akili, Director of the Fannie Lou Hamer Institute, featured as our guest speaker for the night.

Tickets are only $50 per person, and all proceeds will benefit Project New Village as part our ‘Justice Through Equity’ fundraising campaign, helping to build equity and create food justice in Greater Southeastern San Diego through urban agriculture.

**Please note: at this time and until further notice, all unvaccinated persons entering any Port facility are required to wear a face covering. For vaccinated individuals, mask wearing is optional but encouraged.

He becomes the first Native American to lead the agency that oversees more than 131,000 square miles of parks and other landmarks.

Some conservationists hailed Sams’ confirmation as a commitment to equitable partnership with tribes, the original stewards of the land.

Sams has said he would work to ensure that Indigenous history of National Park Service lands is included.

Sams is Cayuse and Walla Walla and lives on the Confederated Tribes of the Umatilla Indian Reservation in Oregon.