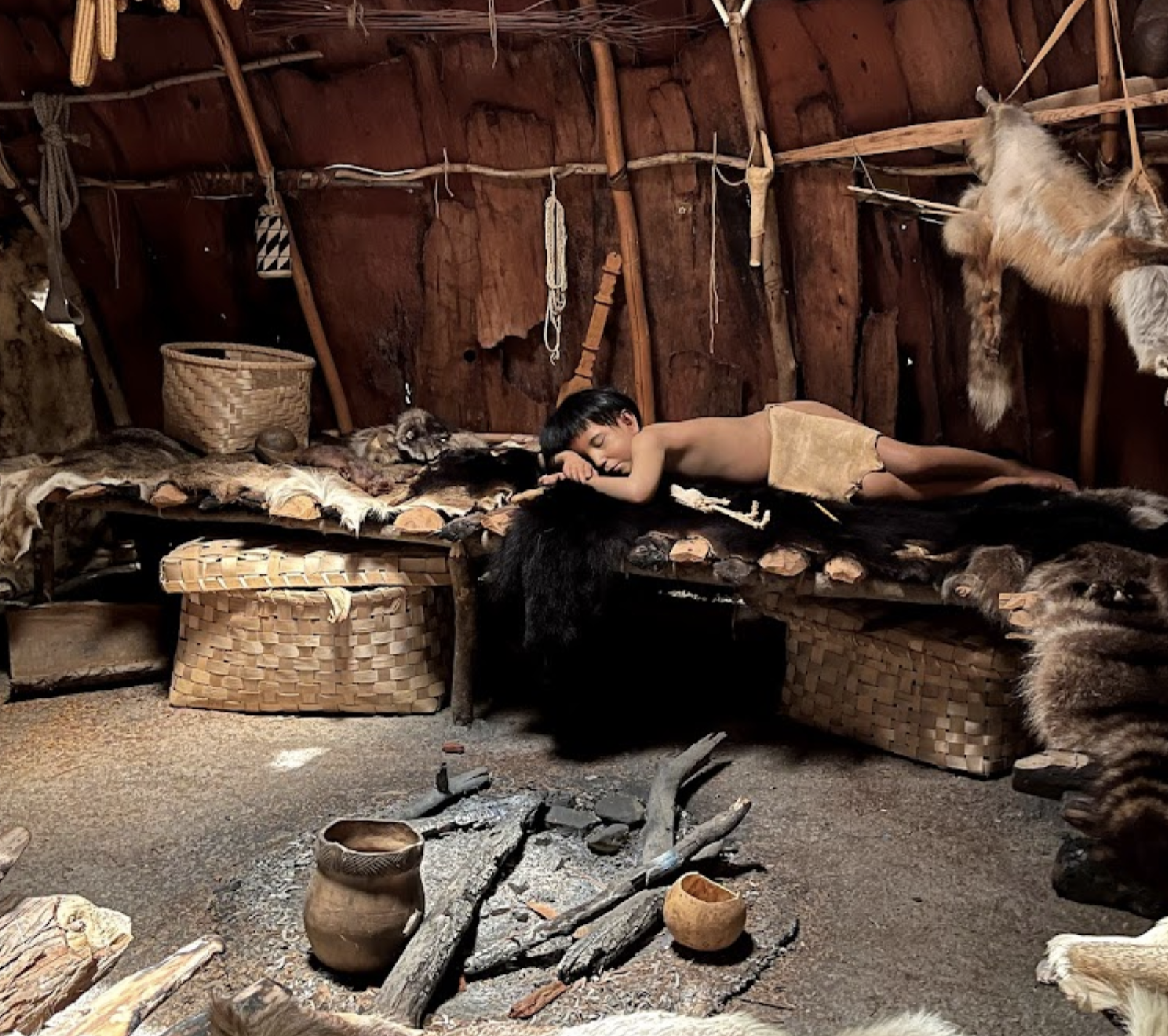 “TRIBAL LAW ENFORCED”, that’s what the sign read in all caps, welcoming us to the lands of the Pequot Nation. It’s a hilly, rocky, wooded landscape. The pine trees were tall and glorious, but the broadleaf trees had still not sprouted their leaves in the mid-April morning in Connecticut.

Our goal was to visit the Mashantucket Pequot Museum and Research Center, reputed to be the finest Indian Museum in the United States. It did not disappoint.

Before we even reached the museum itself, the towering hotel gleamed green in the sun, rising out of the New “England” forest. Even the Pequot security station building was an architectural beauty. I breathed a sigh of relief on this land, patrolled under Pequot tribal law, by Pequot Security. My family and I are of different nations of Indians, but it still felt good that other Indians were running things here.

The Museum’s entrance-way was breathtaking. A curved glass half-dome, futuristic and yet revealing the ancient green-brown forest outside, and allowing the sun to illuminate a large hall featuring replicas of two large dugout canoes with realistic mannequins of Pequot seafarers.

When I say mannequins, I mean realistic-proportioned figures of both sexes and all ages, posed as performing various tasks, such as paddling, hunting, cooking or whatever. We walked among the dioramas of Pequot life, with wigwams constructed inside, fully furnished with fur blankets, containers and replicas of traditional tools.

The smell of wood smoke and cedar was apparently being generated artificially, and helped create the atmosphere. In the sections describing ancient Pequot’s arrival during the Ice Age, a cool mist and refrigerator-like temperatures provide the feeling of walking near glaciers. Each visitor may also use a hand-held audio tour guide that you hold to your ear, telling you about each exhibit after you type in the four-digit numerical code on display.

Pequot people and life continues, despite their near total destruction at the hands of the invaders nearly 400 years ago.  The museum has indoor and outdoor displays of their colonial-era life, with clothing and farm life similar to that of the English-speaking colonizers. There is even a mid 20th-century mobile home on display, because trailers were the only housing available when the People moved back to the reservation in order to maintain their claim to the ancestral land.

An essential part of the Museum’s displays is the photo gallery of the modern Pequot people. We saw large black-and-white photos of various Pequot individual and family groups.  I pointed out to my children how the living Pequot look like us, and noted to my son that “these are the people enforcing the Tribal Law here at Mashantucket.”

To their credit, the Mashantucket Pequot have proven themselves to be good stewards of their land and nearby community.  The pine forests near the hotel look healthy. There is a large tract of farmland as one approaches their Foxwoods hotel, and the communities nearby still have their rural character without the feared overdevelopment that never came into being.

Foxwoods also sponsors the beluga whale exhibit at the nearby Mystic Aquarium.  Pequot-owned businesses employ thousands of local people outside the borders of Mashantucket.

Mashantucket show us a vision of what an empowered Indian Tribal nation can build here in the United States—community consciousness, respect for the land and all the people nearby who live upon Her.