On Ending the FIlibuster: An Explainer 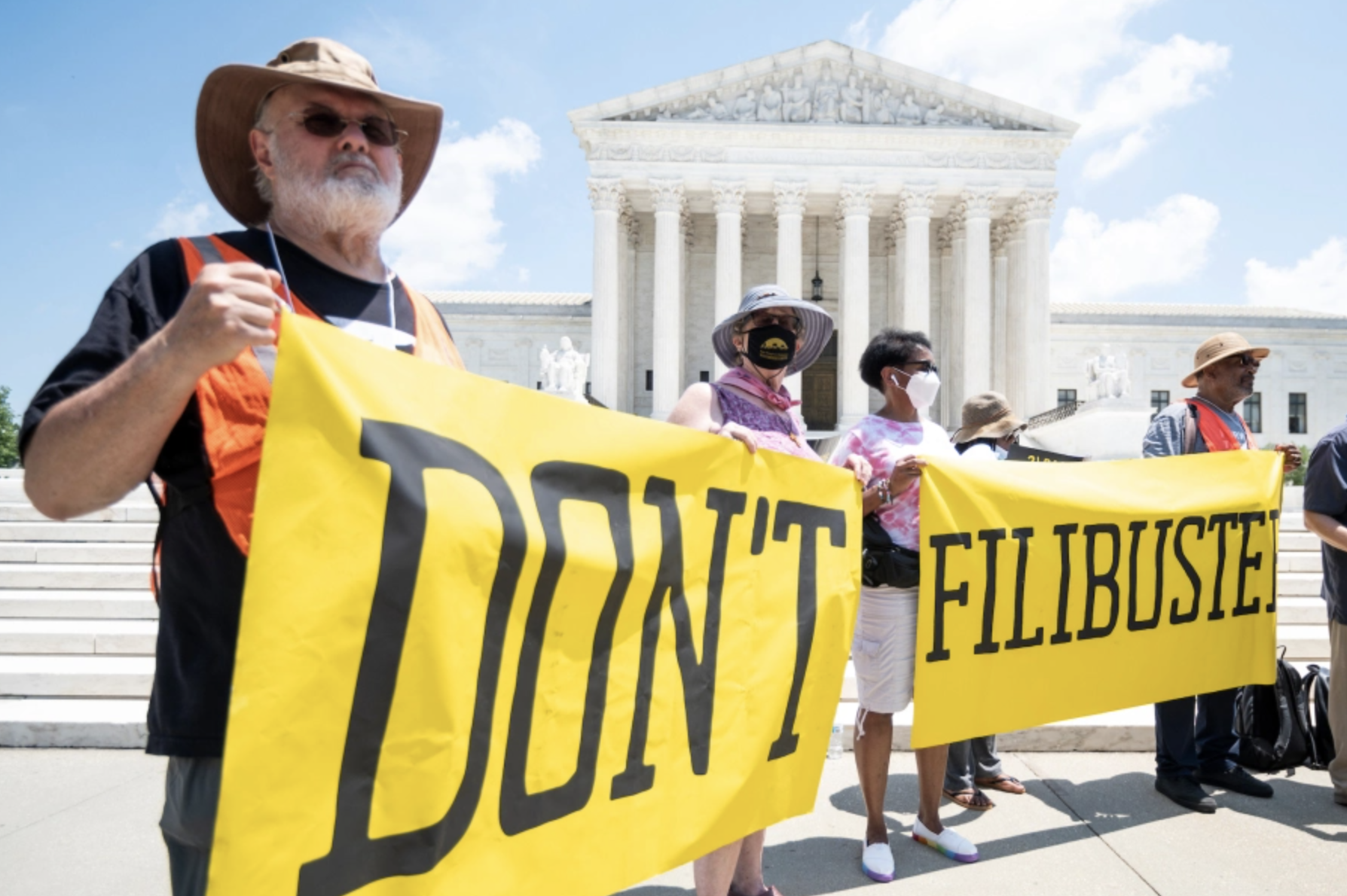 As many of you may know, the filibuster is not in the U.S. Constitution. The quick and dirty description of the filibuster, and why it’s being talked about so much today, goes like this. There are 100 total members of the U.S. Senate; two from each of the 50 States. Most legislative bills can be passed by a simple majority of just 51 votes. Before the filibuster, which first appeared on accident in 1837, whichever party held a majority in the Senate had near unlimited power to pass legislation. With a simple majority of just 51 “yea” votes, and barring a presidential veto, the legislation in question became law. Matters such as impeachment, expulsion from the Senate, and constitutional amendments have always required a two-thirds supermajority of 67 votes.

But with the filibuster, unless the same ultra-supermajority of Senators voted to end debate and vote, any new legislation could be blocked indefinitely by endless oratory. In effect, the filibuster before 1975, allowed just 34 Senators to oppose the will of the other 66.

How did this happen?

The filibuster was given its awesome powers in 1806 when, at the behest of VP Aaron Burr, the Senate eliminated the

“previous question” motion, which allowed a simple majority to end debate and bring legislation forward for a vote. During the rest of the 19th century, many Senators tried to bring an end to the monumentally frustrating filibuster.

But the filibuster itself was used to stifle any such efforts.

The original design of the Senate was that it should be a true deliberative body. As such, once a Senator is recognized on the floor, they must be allowed to speak as long as they see fit, uninterrupted by absolutely anyone, in order to fully vet, explore, argue for, or against any legislation. Such high-minded, optimistic ideals gave rise to the filibuster. But historically, as the filibuster was often cynically used to block anything an opposing party wanted to accomplish, something had to be done to mitigate its gross misuse.

In 1917, during the lead up to the First World War, President Woodrow Wilson argued for the need to allow U.S. merchant ships to arm themselves. Stymied by gridlock and the use of the filibuster, President Wilson pressured the Senate to adopt a new rule called “Cloture,” which could end a filibuster and bring the matter to a vote with a

two-thirds supermajority. The Cloture rule was adopted that year.

In 1975, the Senate reduced the number of votes needed for Cloture to a three-fifths supermajority or just 60 out of 100 votes. To this day the “filibuster rule,” still requires 60 votes to close debate.

The procedural part, called the “traditional filibuster,” requires a Senator to stand on the floor and speak for hours on end, thus delaying any vote indefinitely. The mere threat of the filibuster often makes this part unnecessary. On highly partisan legislative issues, many bills fail to ever surface at all when it is certain they lack the required support of a supermajority.

The traditional filibuster takes some fortitude and commitment. Senator Strom Thurmond famously used the filibuster, speaking for 24 hours straight, in an attempt to impede passage of the 1957 Civil Rights Act. He and his colleagues did the same in 1964 and were unsuccessful both times.

In 2013, Senator Harry Reid of Nevada used the filibuster to read from his own autobiography to block confirmation of executive and judicial nominees by the opposing party.

Four-years later, in 2017, Mitch McConnel would exact his revenge by successfully passing legislation to bar use of the filibuster to block Supreme Court nominations.

The filibuster has not worked as intended. It has not ensured that the U.S. Senate actually functions as a deliberative body in which legislation is thoroughly debated in good faith. It hasn’t accomplished that at all.

Are you glad to have the filibuster when your party doesn’t hold the majority?

But are we, as a nation, truly better off when the party which won the most votes, and gained the most seats, cannot govern as rightly expected by its constituents? Do we want to continue the experiment in democracy, or do we want to call it off as both parties behave as spoiled brats and say: if we cannot have it all our own way then we will take our ball and go home?