Guardians at the Gateway 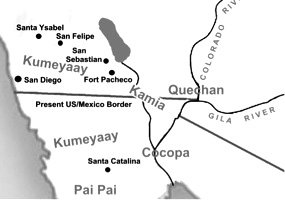 From the earliest explorations by Hernando de Alarcón in 1540, the overland route, from mainland New Spain into Alta California across the Colorado River was recognized as strategically and economically important to Spanish colonizers, and, subsequently, the Mexicans.  The path was charted by Juan Bautista de Anza in his 1774-1775 expedition which was followed by the establishment of two missions in the lands of the Quechan in 1780-1781.   But the Quechan bristled at the heavy-handed disregard for their customs and traditions.  Missions La Purisima Concepción and San Pedro y San Pablo de Bicuner were attacked on July 17, 1781 and destroyed after a two-day battle.  The destruction of the missions left the Spaniards with only the difficult overland route up the Baja peninsula, or the grueling sea journey sailing against both the prevailing winds and the California Current.

The Spaniards regrouped and sought to utilize the Dominican Mission of Santa Catalina in the mountains of the Pai Pai people, south of the Kumeyaay, as a strategic location to launch attacks.  From there, the Spaniards sought to project their power through the Cocopa lands and reopen the route to upper California.  The Cocopa were able to hold off the Spanish soldiers with the aid of the swampy terrain of the Colorado River delta which hindered the use of horses and wagons.  Within ten years, the Spanish withdrew all but a colonial guard detachment and abandoned any further efforts to secure the Colorado River crossing.

The defeat of the Spanish empire was secured in the 1821 revolution that created the independent nation of Mexico.  However, the desire to reopen the Colorado River crossing was still a priority.  The short-lived Emperor of Mexico Agustin de Iturbide (1822-1823) was worried about threats to Alta California, tasking Father Felix Caballero of the San Miguel and Santa Catalina Missions to open a trail.  Caballero, with a Mexican army contingent, made contact with Kamias (agricultural Kumeyaay allied with the Quechan) who pretended friendship but attacked the Mexicans Spaniards mid-way in their Colorado River crossing.  The expedition survived the attack and made their way back to Santa Catarina with their supplies gone, the mission a failure.

After the passage of the Mexican Constitution in 1825, the new Governor Echeandía entered Alta California following the overland route up the peninsula.  It wasn’t long before he, too, sought to reopen the overland route across the Colorado River.  At this time, the Kumeyaay had established a balance of power with the Mexicans, holding most of the interior lands except for an outpost of Mexicans at the Mission Santa Ysabel on the northern boundary of the Kumeyaay lands.  Efforts to increase the garrison at Santa Ysabel risked inflaming the independent Kumeyaay, who maintained strongholds at Tekemuk (Mesa Grande), San Felipe Valley and Cuyamaca Valley.

Nevertheless, Governor Echeandía ordered Lieutenant Romualdo Pacheco to establish a fort to safeguard the desert crossing.  Pacheco chose a shallow lake next to the New River channel as his site.  By mid-February 1826, Pacheco reported to Governor Echeandía that the fort was established.  The response by the independent Kumeyaay was an attack against Santa Ysabel Mission, on April 5, 1826, by 100 warriors from the San Felipe Valley.  Juan Maria Ibarra led a Mexican counterattack with missionized Indian allies into the San Felipe Valley, killing twenty-eight of the independent Kumeyaay and taking twenty pairs of ears.  The next day the missionized Indian allies killed an additional eighteen.   One independent Kumeyaay captive was held for a couple of weeks and then executed on April 23rd.

On April 26th, 1826 independent Kumeyaay launched an attack on Fort Pacheco from the San Sebastian area killing three and wounding three other Mexican soldiers.  After the attack the Mexicans decided to abandon the fort and it was never reactivated.

This was the only fort built by the Mexican government in Alta California.

The overland route across the Colorado River remained secure until the coming of the Americans in 1846.  Even then, it took two years after the establishment of Camp Yuma in 1850 before the Quechan agreed to end hostilities.  The resistance of the Quechan, Kumeyaay/Kamia and Cocopa over a 50 year period helped to delay the settlement of Alta California and helped to maintain the independence of their Nations well into the American period.