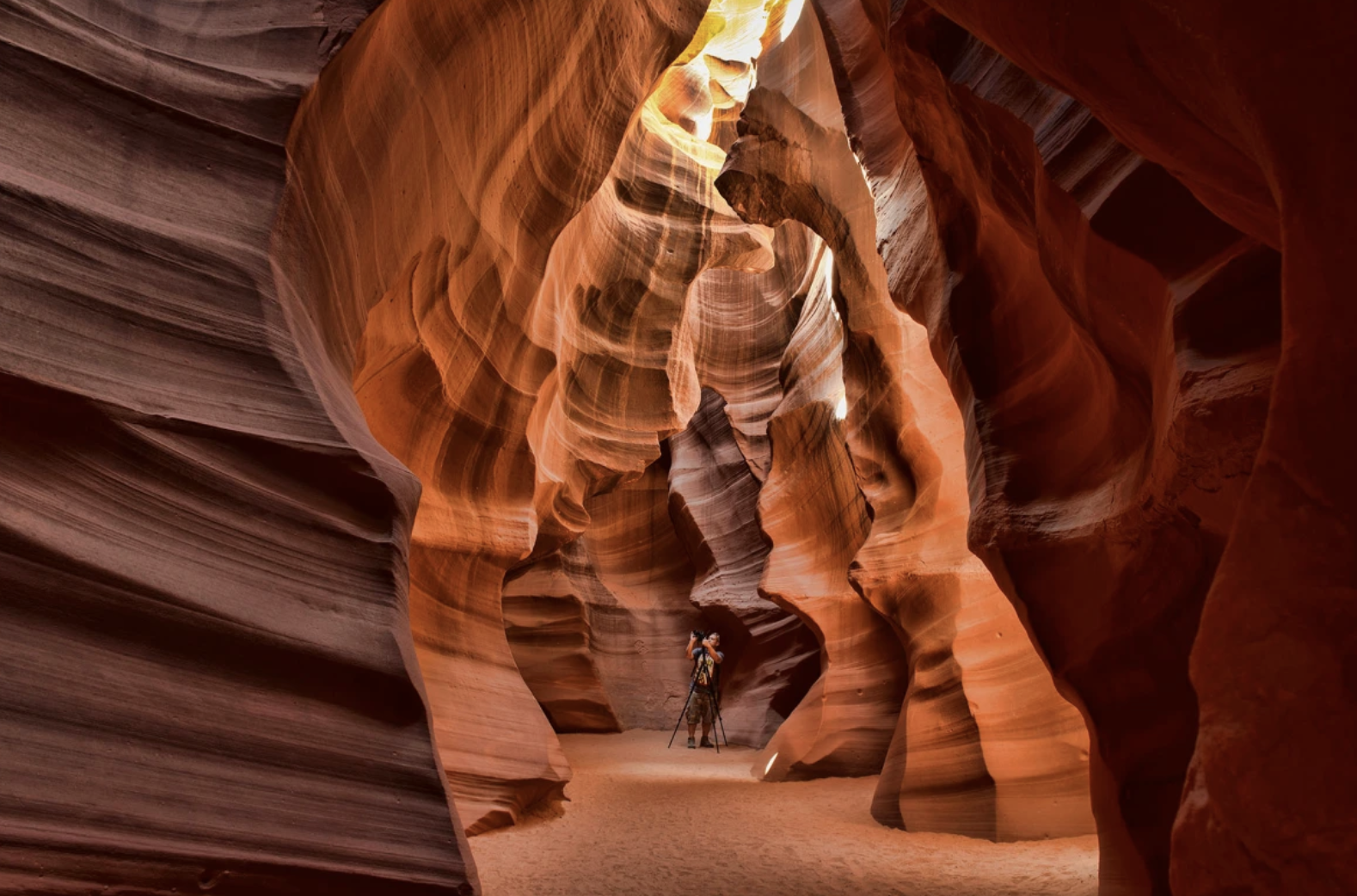 Stepping over sagebrush-speckled sand, I followed Trey Williams through a sequence of red sandstone outcroppings. If I found myself alone here, in northern Arizona’s mazelike Antelope Canyon wash, I’d be lost in five minutes. Williams clearly didn’t need landmarks as he guided me and a small group of visitors. He spent much of his childhood on this land. “My great-grandmother lived out here, and we used to play all over, riding our bikes across the slickrock,” he said.

Cresting a rise, we faced a towering red rock formation obscuring the entrance to Secret Canyon. Located on Navajo land and managed as part of the Lake Powell Navajo Tribal Park, the slot canyon requires a permit and a Navajo guide to enter. “Anything else is true disrespect,” Williams said.

But before the park began operations in 1997, tourists commonly trespassed on this Navajo Nation land to explore slot canyons without hiring a guide. That disrespect is in keeping with a stark reality. Despite the long-standing popularity of tourism in Indigenous lands across the United States, Canada, and the world, Indigenous peoples have often missed out on the resulting tourism revenue. That’s changing. The tour company where Williams works, Horseshoe Bend Slot Canyon Tours, is majority Navajo-owned. And in 2015, the Navajo Nation developed a plan for promoting tourism as a means of economic development, one of many Indigenous tourism initiatives transforming travel today.

For visitors, that means new opportunities to experience rich cultures and magnificent places, all while spending money that directly benefits Indigenous peoples. Ready to explore? Here are three areas in the United States and Canada where you can support Indigenous-led tourism with your travel dollars.

The Discover Navajo tourism program is a starting point for encounters with the Navajo Nation in Arizona. Highlights include the Navajo Nation Museum in Window Rock, the Explore Navajo Interactive Cultural Museum, and Tuva city’s Navajo Code Talkers Museum.

But Navajo tourism opportunities abound in the state. Navajo-led Jeep tours at Canyon de Chelly National Monument are the only way to enter the monument’s valley for a closer look at Ancestral Puebloan villages in alcoves under the canyon rim. At Monument Valley National Tribal Park, Navajo-led Jeep and horse tours explore petroglyphs and rock formations. And in both Canyon de Chelly and Monument Valley, Navajo-owned accommodation options include the chance to spend a night in a traditional eight-sided hogan.

In addition to the Navajo, Arizona is also home to 21 other sovereign Native American communities, whose lands make up more than a quarter of the state. The Hopi Tribe—renowned for their pottery, weaving, basketry, and katsina dolls—offers guided walking tours of Walpi Village atop First Mesa, which has been continuously occupied for 1,100 years. At Second Mesa is the Hopi Cultural Center’s hotel, restaurant, and gallery with artists in residence.

The Zuni Nation offer tours of Zuni Pueblo that focus on the nation’s intricate silver inlay and stone carving. At Grand Canyon West, proceeds from the überpopular, Hualapai-run Skywalk support the tribe. Deepen your experience by rafting with the Hualapai River Runners or staying at one of the Hualapai-run lodging options.

And don’t skip the trading posts. While these popular destinations are sometimes derided as tourist traps, many actually serve as community hubs and are among the best places to purchase authentic jewelry, textiles, and other crafts. Established in 1876, Hubbell Trading Post is a National Historic Monument. The Tuba City Trading Post, in operation since 1870, remains an active center of trade for local artisans.

It’s never been easier to support South Dakota’s nine federally recognized tribes, since the South Dakota Native Tourism Alliance (SDNTA) launched in 2019 to ensure they benefit from the $2.75 million spent by the state’s visitors each year.

“Each tribe is unique not only in their landscape and cultural identity, but in regard to what they’re comfortable sharing and the boundaries they want to set around sacred places,” said Dew Bad Warrior, one of the SNDTA founders. “We want to share our stories in ways that are authentic to us.”

Visitors might have some learning to do. The SDNTA developed a visitor code of conduct with the dos and don’ts of visiting Native communities here. “It’s really helpful for everyone, so that tribal communities can feel comfortable opening to visitors and visitors don’t feel anxious not knowing what will give offense,” said Bad Warrior.

Opening this summer is Oglala Lakota Living History Village in Pine Ridge, where visitors can enter tipis, listen to storytellers, and learn about the tribe’s legendary warriors and horsemanship. Also at Pine Ridge, a Wounded Knee Massacre Memorial makes vivid the brutal killing of more than 250 Lakota at the hands of US cavalry. Learn more about the massacre at Actá Lakota Museum and Cultural Center on the campus of the St. Joseph’s Indian School.

For a full appreciation of contemporary Native American culture, there’s nothing like the three-day Black Hills Pow Wow, held every October, said Bad Warrior, who is the event’s vice president. “We have dancers, drummers, and singers in the most beautiful regalia from all over the country and Canada, as well as talented artists and vendors. We pride ourselves on bringing everyone together and building bridges between all cultures.

British Columbia’s 198 First Nations are leaders in the recent growth of Indigenous-led tourism in Canada. They have opened hotels, launched tour companies, and developed programs ranging from fishing and kayaking expeditions to cultural workshops and multiday immersions.

“Many people think that Indigenous culture is about preserving the past, but there is an amazing cultural renaissance going on that is very vibrant and contemporary,” said Keith Henry, president and CEO of the Indigenous Tourism Association of Canada. “Indigenous tourism is playing an important part in building up that cultural strength and allowing us to show our pride.”

The SDNTA’s Bad Warrior said all this growth comes at a time when state and national surveys show rising interest in learning about Indigenous cultures. Travelers are curious. Now there are Native American-led initiatives to meet the demand. “In the past, the lack of information and well-developed tourism experiences meant people didn’t really know how to explore this interest,” she said. “But that’s changing fast.”